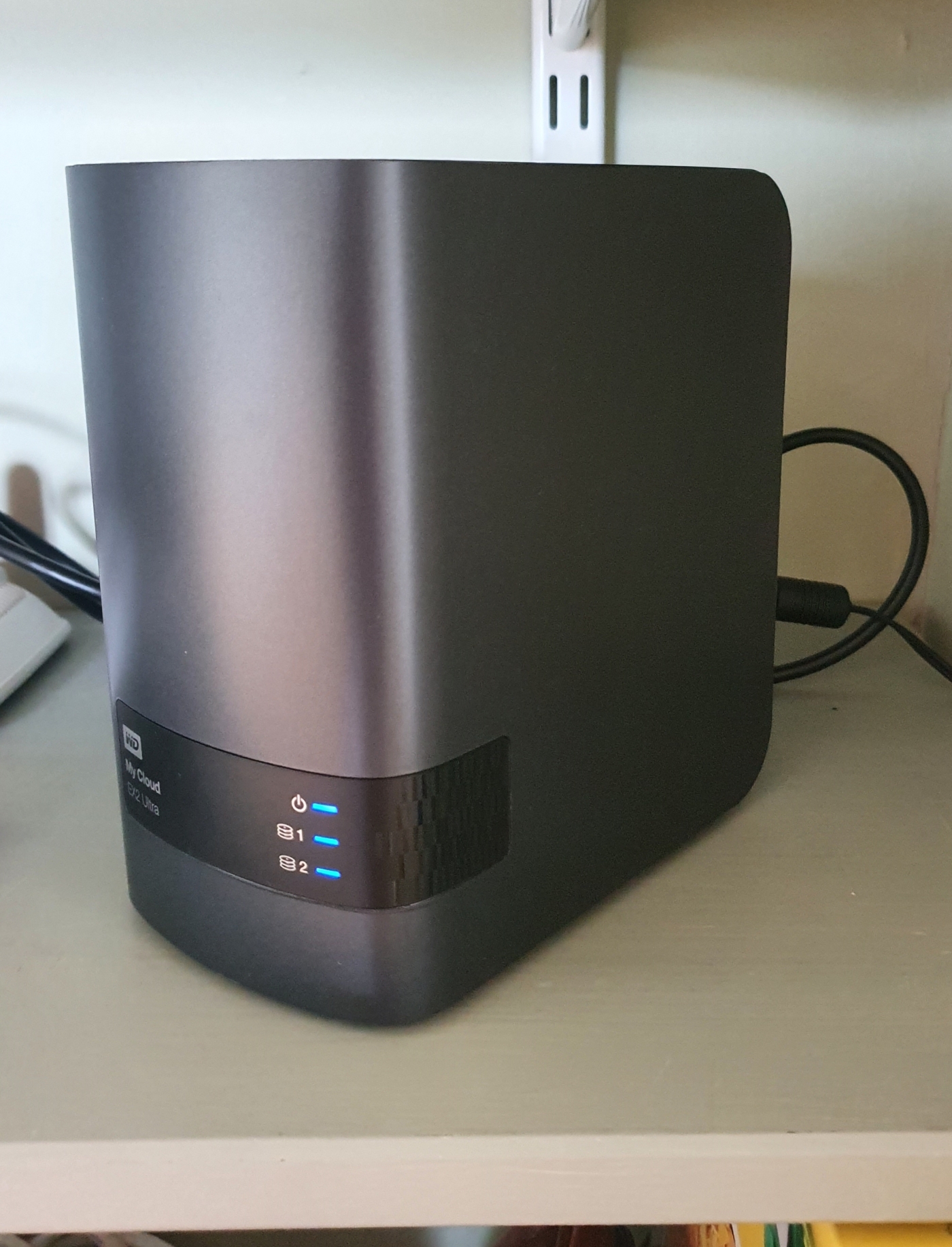 Backing up is super important, we all know this, but we’re not all great at it, and almost everyone I know has had an incident, at some point, where important data has been lost. It’s not just having duplicates of things that is the issue either – just storing and accessing the kinds of big datasets generated through XROMM, Simulation, or photogrammetry can be a pain in the arse.

We recently got a network-attached storage solution for the home network, an 8TB WD My Cloud Ex 2 Ultra. It’s been pretty great over the past few months, so I thought a little review and recommendation was in order.

A quick note about how I backup/store things though. I mainly use OneDrive as my primary storage solution. Even though I get office and OneDrive through work, my wife and I pay for personal office subscriptions – the 365 Family option is £79.99 a year, or £7.99 a month. We pay yearly, so it works out at £40 each, and for that we get several copies of office, and 6TB of cloud storage (split into 1TB per user chunks – we only use two accounts at the moment, but could easily use other email addresses for more storage). It also means we can install office apps, though we get an office license through work too. This way though, I feel comfortable having all my personal files in my personal Onedrive.

Everything’s therefore synced to the cloud. I have one home computer where all OneDrive files are downloaded, so also exist locally, then my other computers (work computer and my Surface Pro X) can access files as and when they need them. If I know I’ll need some files later, I can keep the synced, so I do this with my Zotero library of PDFs, for instance, so I can always access them on my Pro X even when off line.

However, even with Cloud and Local files, data can be at risk, especially when everything is synced – I have in the past deleted something vital, then not realised until after OneDrive’s 30 day recycle bin emptied itself. So a longer term, larger storage is useful.

To that end, the 8TB NAS comes in. It’s a great device, it’s much quieter than my previous networked storage, a 3TB Seagate Personal Cloud, and it looks nice too, taking up less space on the shelf. It’s also more accessible, the lid pops open exposing the two 4TB WD Red (ultra reliable) HDDs within, which can both be easily replaced.

The settings are accessed through a local webpage. On windows, under network in File Explorer, it shows up as storage:

Double clicking on that takes you to the landing page:

The interface is fine, I’ve seen worse. One of the main choices when setting up is whether you want the two disks to be striped, giving extra speed (but less reliability – if one drive goes you lose data from both), mirrored, providing extra security but half as much storage, or just Spanning, acting as 8TB, but one volume can be recovered if the other goes down.

There’s a selection of apps that may be useful too:

Though I don’t use any of these.

And you can enable cloud access to your drive, though I don’t do that either.

Finally, you can set up individual shares, which can appear to computers on the network as seperate drives. This is quite useful for setting up a share for me, and one for my wife, then we have our own spaces we can mount to our computers independently.

There’s not a lot else to say really – it’s a nice looking device, it’s easy to set up with plenty of options. It’s been reassuringly fast, quiet, and reliable so far, but we’ll see if that holds up over the years to come. It also remains to be seen whether it will be worth upgrading the drives in the future, or if by then it’s just worth buying a new NAS.

You can buy the MyCloudEx2Ultra at this affiliate link in a bunch of sizes up to an obscene 36TB costing a grand, down to just the housing and OS, to fit disks yourself.