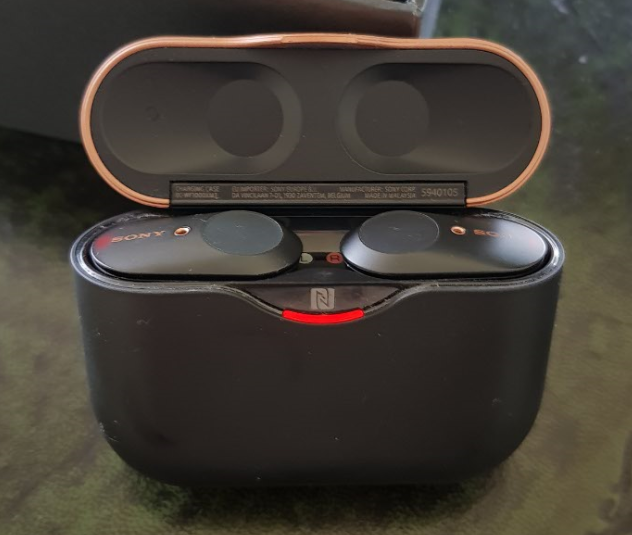 This post contains amazon affiliate links, but remember to shop around and support local businesses if you can!

I recently purchased a new set of earbuds, the Sony WF-1000XM3. This is for personal use (music and podcasts at home and during commute), and potentially as a headset for the multitude of Zoom/Teams/Skype meetings and the impending online teaching coming in the next academic year (hence the “academic tech” tag)

TLDR: While they’re great for personal use, it seems they’re not going to be a whole lot of use for online meetings due to the sub-par microphone.

I’ve had a difficult relationship with headphones/earbuds in the past. An inordinate amount of wired buds have seen the full force of a washing machine cycle from the inside, having been left in trouser pockets. It was with some trepidation that three years ago I spent a whole £30 on some truly wireless earbuds in the form of these unbranded things. (they were a bit cheaper when I bought them). They sound fine, have reasonable battery life, and no other features whatsoever. The microphone was basically useless and using them to make calls was an exercise in futility. The act of having to turn them on and connect every time was also a mild inconvenience. But, they lasted 3 years without being washed or lost, so I decided I was probably responsible enough to treat myself to a nicer pair of earbuds.

I was specifically looking for the following features, in this order:

I’d been eyeing up a few options for a while, but nothing had all the features I’m after. Active noise cancellation in particular seemed to be the biggest limiting factor, with the Surface buds and Galaxy buds+ lacking this feature.

Anyway, based on my online research, I went for the Sony WF-1000XM3s, which repeatedly seemed to receive praise for their ANC and sound quality. Whilst the links I’ve provided go to amazon, I actually picked them up on Ebay for ~£100. It’s late in the tech cycle, and they’ve been out for a while now, so they can be had for a bit cheaper second hand.

In the box, you’ll find:

They feel and look very premium (especially compared to my previous no-brand set). The case has a stylish copper effect lid that satisfyingly clicks open and closed with magnets. The black portion of the case is a soft matt texture, but that does scratch easily, presumably hence the rubber protector in the box. I find that rubber case protector annoying, as it increases the bulk of the already slightly large case, and adds a tonne of friction making it more difficult to put in and take out of a pocket. However, I’ve already managed to scratch the case on the back, so I’m paying for not using it.

The earbuds themselves are superbly made and look great. They’re a touch bigger than some of the other options out there.

I’m not an audiofile, hence why I was able to use cheap wired and wiress earbuds for years. However, even I can tell that the Sony’s are significantly better than anything I can remember using before.

For the first time in years, I’ve taken to just sitting in a quiet room and listening to music. The depth of sound is really impressive. I’ve been going through my highest quality MP3s, as well as trying out trials of Apple Music, Spotify and Amazon Music Unlimited (I usually don’t subscribe specifically for music services).

I’ve not had headphones/earbuds with ANC before, and it’s pretty cool. It’s not perfect by any means. In fact, the difference between passive noise cancelling from the foam tips and active noise cancelling is relatively small, but it does make a big difference if I’m stood near the washing machine or mowing the lawn. Higher frequency sounds tend to make it through though. It’s good for constant low frequency sounds – car/plane/train noise, but it’s no good for voices, which means this isn’t the answer to dealing with shared offices.

There’s also an ambient sound mode, which through the app (see below) can be set to let any amount of ambient sound in. I actually think this is almost more impressive than the ANC – that I can have earbuds wedged in, press a button, and hear everything around me clearly.

One downside I’ve found so far is that the shape of the earbuds makes wind noise very noticeable. If you’re outside and anything more than a light breeze is blowing, you’ll hear that quite prominently as the wind moves over the earbuds. That’s disappointing.

This is the real let down for me. The mic is probably good enough to make calls, but you’re not going to want to have nuanced conversation using the earbuds. I’ve recorded a sample of me speaking into my surface go using the built in mic and the Sony’s. It was an echo-y room, but the difference in recording quality is pretty pronounced.

There’s no way I can use the earbuds during video meetings/presentations.

The range of tips in the box mean you’ll probably find something comfortable. While the earbuds aren’t the smallest in the world, I woudln’t say they are particularly heavy, and I can wear them for hours at a time without discomfort.

However, none of the included tips provide a particularly strong fit, and trying to run or exercise with the earbuds results in repeatedly re-fitting and readjusting them as they work their way out. I’ve read that the answer is to use some special Comply eartips, but I’m loath to spend another £15-20.

It’s still early to tell – I’ve only had them a week, but I’ve been able to use the pretty extensively without running out of juice.

Each earbud has a touch-sensitive surface on it. These can be configured to perform different tasks using the app. For instance, you can set the button to invoke Alexa or Google, or to play/pause/skip, or to cycle through Ambient/passive/ANC, or control volume.

Setting the function to volume allows you to raise the volume with a tap, or lower it by continuing to press. That means there are gestures/commands not used by the other settings. I’d love to be able to invoke Alexa or Google assistant, but to do that from the earbuds, I have to remove the abaility to control playback or noise cancelling. Why? Why can’t I mix and match these commands? It seems like a significant oversight of usability to me.

The app itself is fine, though I do find that sometimes there is a conflict between the volume in the app and the volume of the phone, which takes a little tweaking to get back in sync.

I really like the earbuds, they are comfortable and have great sound, and the ANC will be good for the daily commute when things return to ‘normal’. But ultimately the ANC isn’t as good as I’d hope, the app/controls could be better, and the mic is basically useless for anything but simple phone calls.

Whilst I’ll keep them for listening to music at home and out and about, they are not, sadly, the academic tool I was hoping they would be.